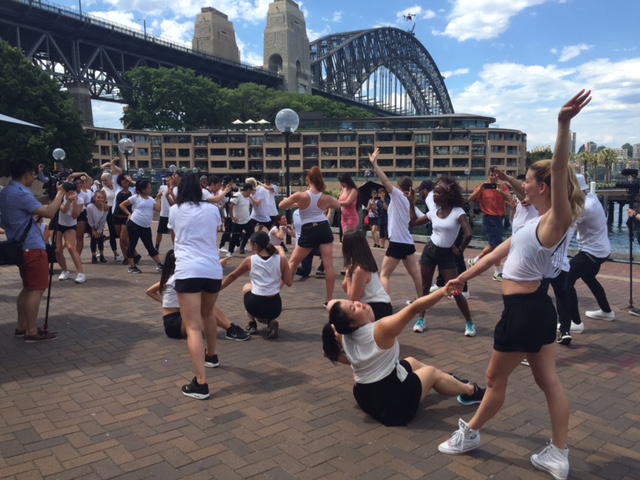 30 Thrill professional dancers and performers created a wonderful surprise wedding proposal Sydney Flash Mob with the Sydney Opera House and Sydney Harbour Bridge featured. Even a skywriting plane overhead with Marry Me for the young couple from Hong Kong’s most magical moment.

Our 30 amazing talented flash mob dancer performers provided inspirational dance choreography. 6 Tracks of music were mixed with the highlight moment being Bruno Mars “think I Want To Marry You”. Creating an eternally captured moment for the couple and 1,000’s of onlookers bringing an appreciative audience.

The wedding proposal flash mob dance in Sydney’s Rocks was a complete surprise! Attracting people to witness and share the moment in time with a wonderful couple who embraced a touch of exhibitionism.

The effect of 30 dancers took away the pressure, making way for an explosion of  happiness when the skywriting plane created a love heart in the skies.

This feeling in Sydney brought people together, sharing a feeling of happiness for other people to witness their marriage proposal and unity.

In that one moment it made people forget that they don’t know each other. Freeze framed. Allowing laughter, chatter and sharing such a unique occasion.

Flash mob event dance routines and choreography are planned and practiced by the Thrill team. To an impeccable level of synchronisation coupled with amazing dance moves by individual performers and artists. Creating a spectacle of wonderment in Sydney. 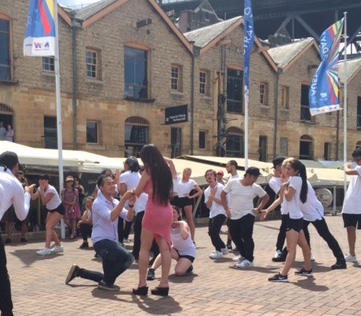 We enjoy ensuring the dance is interpretative and lyrical. Matching the clients brief.

That everyone and anyone can participate. Our choreographers design routines to fit peoples abilities and talents. We help design and create special events that last a lifetime. We love get everyone moving and having a great time!

Thrill provides moments to bring people the surprise of happiness and give performances that can be enjoyed. We provide entertainment and activities that loosen people up and get people to just throw themselves in. Really getting involved without a care in the world!

The most important thing is people participating in all shapes and forms – making a thrilling flash mob an amazing experience for all!

Their very special, unique and authentic wedding proposal. Performed in The Rocks, with a gorgeous backdrop of The Sydney Opera House and Sydney Harbour Bridge.