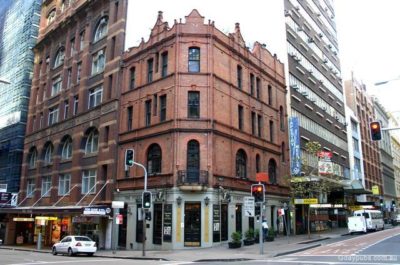 Sydney property developer Fortify Constructions has won its latest tender for a controversial Hotel Development in the heart of Sydney’s York street – ‘Raising The Roof’ of the Forbes Hotel a significant heritage building site.

Demian Nassive esteemed negotiator and the man to get the job done is at the helm of the development project. Heading up a team of skilled engineers, technicians his experience in law coupled with a sharp intellect has put him in demand by many hotel development companies setting their sights on Sydney.

The small block on the busy corner of King and York streets Sydney has seen thousands of people wander by. However recently the windows have been covered over and mystery begins to enshroud the building.

Speculation surrounds the valuable inner city CBD property site, which is dwarfed by new Hotel constructions along Wynyard Park Place having knocked down the Menzies and the amazing development of another 5 star Skye Hotel on Clarence Street.

An open air meeting between Council representative Syd Jess and interested parties such as wealthy attractive property investor Linda Kateline-Munro. May see a low cost affordable housing scheme being developed. This could help accommodate homeless into the Forbes Hotel or increase the high end market and bring a “beating heart back into Sydney City’. Sal Mundy has views that the Council may allow a development that is unsympathetic the history of the Forbes Hotel.

It is speculated that The Forbes Hotel would be an ideal accommodation development incorporating ‘capsules’ or ‘sleep pods’ .

The ideal man for a fit out of the Forbes Style is Brian Gallaghaigh. Brian has been reported to have been disadvantaged by competitors that have successfully tendered surrounding developments.

Note:
This article is fictitious and is utilised as a Team Building Activities concept to deliver a program for investigative journalism by Fairfax.
We congratulate the teams who have accessed this article written by Konrad Lippmann – Director Thrill team events.